Among the remarkable illustrations of Pioneers section of The Pinecastera new box set of books by Nacho Banos and Lynn Wheelwright, there is a page from a Montgomery Ward mail order catalog from 1937. It shows some electric guitars made by Gibson, an archtop Spanish and a small body Hawaiian , and its moving title – “Now the Man in the Back Row Can Hear” – encapsulates how the developing electric guitar revolution exploded in the mid-1930s.

Lynn Wheelwright further explains that the archtop Recording King 1270 in this ad predated the start of production of Gibson’s ES-150, which has usually been described as the company’s first Spanish electric guitar. In fact, the 1270 and a similar Old Kraftsman 8709 model for the Spiegel catalog were, within weeks, Gibson’s first ES guitars. As Lynn writes: “Not the iconic Gibson ES-150s of Charlie Christian fame, but rather a few cheaper second cousins ​​by the name of Recording King and Old Kraftsman.”

It’s one of many big and small revelations of the mighty limited edition pinecaster package. It is divided into four books that tell the story of Fender’s early electric guitars, spanning the period from the 1920s to the mid-1950s, and also includes memorabilia reproductions, an app with video demos by Deke Dickerson and others, and works of art by Billy Gibbons. .

by Lynn Pioneers explores the origins of the electric guitar in the 1920s and 30s, and the three books that follow analyze in detail how Leo Fender and his team drew on these foundations to build their first Esquires, Broadcasters, and Telecasters (and before Ash , yes, there was pine).

Lynn is well qualified to present such a story. He is a tireless researcher and collector who searches for written records, factual evidence, and actual examples of the instruments involved to determine a true timeline and identify key people and companies.

It all started nearly 40 years ago when he met guitarist Alvino Rey, whom he describes as the king of the electric guitar in the 1930s, a time when Gibson hired Alvino to help him with early company’s electrical experiments. Not only did Lynn become Alvino’s guitar tech, but he also sensed an opportunity.

“I could actually talk to the man who helped start this evolution and this revolution,” he tells me. “I could listen to his stories, find out what he was doing, browse his albums. It made me feel like there was something there that I really needed to do – put together the most comprehensive collection of electric instruments ever made. Of course, I had no track record back then – few books and no internet, I just had to walk around in the dark and trip over stuff.

Epiphone Zephyr from the 1930s

In the years that followed, he brought to light some impressive things and amassed a unique collection. “I tried and largely succeeded in finding the first example of these things, and then later examples, so I could examine them forensically and find out how they work.”

A viola, did you say? This is an important point. As Lynn built up his collection, he didn’t care whether the instruments were guitars, mandolins, or violins. “Because it wasn’t the ‘frame’ that held the pickup,” he explains. “I was interested in the technology, the evolution and the design of the pick-up.” In Lynn’s story, it’s the pickup that counts. “Because that’s all an electric guitar is. You can stick a pickup on a two-by-four, carve it into a neck, and you’ve got an electric guitar.” 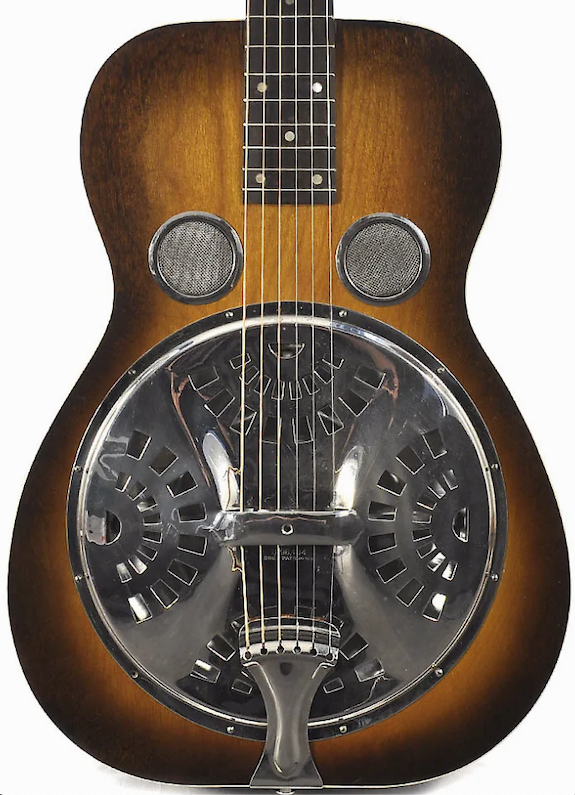 There is another division of types that confuses it. “Why do people put electric spanish and electric hawaiian in different bands with hawaiian always ending up like the ‘it’s not a guitar’ sub band? It’s a solid body electric guitar, damn it And it doesn’t take much to turn this thing 90 degrees and play it like a Spanish guitar. My line is always, “It’s technology, you idiot.” A pickup can be put in any what.”

One of the first electric instruments that Lynn has evidence of is what he describes as a crude electric synthesizer violin, the brainchild of a certain Frederick W. Dierdorf of Rochester, NY. Frederick drew a rough design in 1922 and took out a patent two years later, but after various attempts to interest manufacturers, his story ended in court.

“In 1943,” says Lynn, “in an attempt to defend his rightful place in history, he filed a lawsuit against the industry giant, Gibson, Inc. He was broke and represented himself- even, and the court transcripts read like a tragic Comedy. Faced with Gibson’s experienced law firm, he was beaten soundly.”

Frederick’s original patent predates the early electric guitar designs detailed in the Pioneers book, which began in the late 20s and early 30s with Stromberg-Voisinet (later Kay), Vivi-Tone and Ro-Pat-In/Electro String/Rickenbacker. It is at this time that we meet the remarkable George Beauchamp. He is the man whom Lynn names when I ask the most important innovator and company in this history of revolutionary electric string instruments. “George and Electro String successfully designed, manufactured and marketed the first electromagnetic transducer driven directly by a string,” he says.

Next would be Dobro, in 1933. “It’s to redesign the pickup – which, by the way, suppressed the hum – so that the magnet wouldn’t get in the way of the player. After that, it must be whoever designed the 1935 Regal pickup, just an incredible futuristic work of engineering genius.” 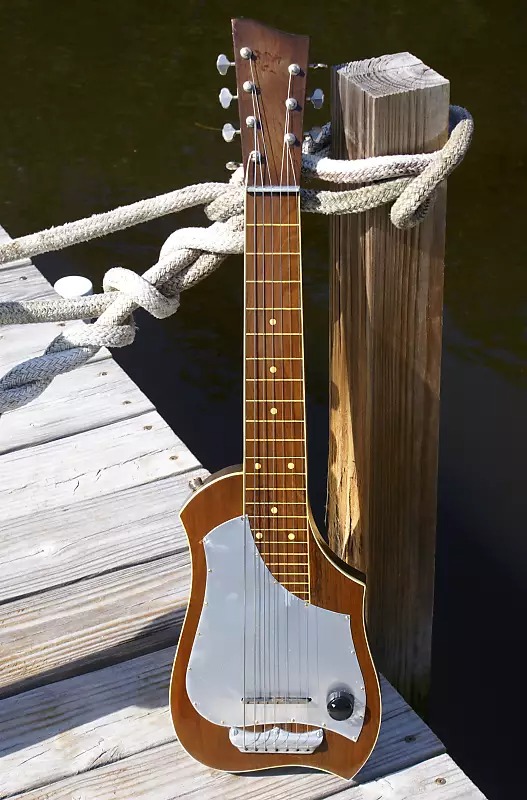 And, of course, Gibson. “Once Gibson made sure the waters were safe, they supercharged interest in electric guitars with their production capacity and tremendous sales force. And while I appreciate Lloyd Loar and his designs for Vivi -Tone, they were just a bit too far out in left field, and a bit cumbersome compared to the Beauchamp and Dobro shots.”

If the Pioneers book and its discussion of National, Audiovox, Slingerland, Harmony and the rest whet your appetite for something a little more unusual than another blazing Les Paul, it’s not impossible to pick up some of these for yourself artifacts from the dawn of the electric age. “You can buy a good ’30s lap steel for the price of a good Ibanez. That’s okay,” says Lynn. An electric Spaniard from the 1930s, however, would be much more expensive and harder to find.

Some of the videos from pinecaster feature Julian Lage, who played through Lynn’s collection with a recurring commentary. “Julian was talking about how wonderful the instruments were, and he kept asking, ‘Why don’t they make any more?’ I thought: Well, because time passes and tastes change. There are a number of luthiers and independent builders still making examples of the ES-150, but no one even cares about the Dobro design, or especially the Regal design, which is the one that knocks my socks off “, he said. “And I guess it’s because of their relative obscurity. In the case of the Regal, for example, there are only two examples of this guitar in existence. And I own them both!”

If you’re attracted enough to these instruments to want to find some, Lynn advises you to concentrate. “Do you want things that are historically significant? Do you want to collect them to play? Do you want to have some cool 30s electric art hanging on the wall? Do you want to explore technology, like I did Do a little research, read books, look online,” he suggests, “and decide what you’re trying to accomplish.”

Probably the easiest place to start in early electricals is with Gibson, simply because they were the most prolific. “But if you’re interested, like me, in evolution and design, you need to move into the dark,” says Lynn. “As I said, it was my goal from the beginning a million years ago to find the first example of every electrical instrument produced. Because I thought if you want to study evolution and development, you have to start from scratch. In the middle doesn’t work.”

Old technology is hitting a new generation’s radar, Lynn says. It gets cool. Perhaps now is a good time for a new interest in pioneering electric instruments? “Early computer technologies, Apple and so on, and Edison’s stuff, early electronic experiments, Tesla coils – all of that is being reconsidered and re-evaluated. People are finally giving them the importance they deserve in the story.”

For a long time, Lynn was baffled that no one cared about early electric guitars. Looking back now, he knows why. Simply because they weren’t worth anything. “When I went to guitar shows in the 80s and 90s, I would ask the dealers, ‘What do you have 30s electric?’ If they had anything, they would say that it was at the store, ’cause it wasn’t worth it – it wasn’t worth taking up room in the van But if it wasn’t for the redheaded stepson, the Lake Placid Blue Strat wouldn’t would not exist.