Hello, I am interested in compression. Can you tell me more about it and how to use compression with guitars?

Hi Nick, that’s a great question. Fuzzboxes, overdrives and tremolo pedals make an obvious difference, but the compression can be subtle to the point of inaudibility. However, that doesn’t mean that compression isn’t useful or even essential for certain sounds and playing styles.

Although their amplifier electronics can give compressors a “signature sound”, changing the tone is not their primary function. Instead, they alter the dynamics of a signal while leaving frequency balance, harmonic content, and distortion levels unchanged.

Stompbox compression is used before the amplifier, but studio compression is always applied after the amp, virtual or otherwise. In addition to having greater sonic transparency, studio-style hardware and software compressors tend to have more sophisticated and comprehensive controls. You can set the attack and release times, the threshold level and the amount of compression.

Anyone with a DAW installed on their computer or mobile device has access to studio compression, whether you’re using compressor plug-ins that come with a DAW or demanding vintage emulations. Many also provide virtual pedal compressor plugins.

Most classic guitar compressors had very few controls. At best, you can expect a compression control – sometimes called “sustain” – and a volume control to compensate for any perceived drop in level. Some modern compression pedals now offer studio-grade sound and controllability. The Origin Effects Cali76 is an obvious example, since it is based on a classic UREI 1176.

So how is compression used? To answer that, let’s take a look at how compression is used in different musical genres.

Many country pickers have dazzling technique, but compression is invaluable for bringing out notes in an incredibly even way and achieving lightning-fast passages that are as smooth as sipping whiskey. Country compression is often far from subtle, but you’ll want a compressor that has a transparent tone.

A medium amount of compression should be applied and we suggest a medium attack time to allow some picking dynamics to pass. Medium to slow release times also work and you might want to turn the output up a bit to bring the level back up or maybe hit the amp a bit harder. A compressor in this context provides much of what you would expect from an overdrive, but without adding distortion.

By applying compression with a hard knee or a quick attack, you can completely eliminate the peak at the start of the note. You can even drop the level below the compression threshold, which means you’ll have to increase the output of the compressor. The sustain trick is achieved by adjusting the release time so that the compressor output rises at roughly the same rate as the input signal decays.

Classic examples of this type of compression include Jeff ‘Skunk’ Baxter with Steely Dan and early recordings by Mark Knopfler. David Gilmour’s solo on Another brick in the wall (part two) takes this approach to the extreme – you may need to chain two compressors together to achieve a similar effect.

Studio compression is usually used more subtly to help guitar parts fit into the mix and improve detail. By gently reducing the dynamic range, a compressor can ensure that loud parts don’t skip out and quieter parts can be heard. This type of compression can also help if a player’s technique leaves something to be desired, and there’s nothing stopping you from setting up a pedal compressor to do the same.

We suggest medium or slow attack and decay times, with a low compression ratio. When you get this one right, it’s the kind of effect you’ll only notice when turned off, and it’s especially useful with narrow single coils which tend to have a faster, more dynamic response than single coils and larger humbuckers. It also helps if your compressor has a mix control to balance compressed and uncompressed signals. This is sometimes called parallel compression.

Bringing the ride to life

Gamers often wonder where to place compression in the signal chain. There are no hard and fast rules, but in most cases we suggest that sooner rather than later is better. If you’re using overdrive, fuzz, or clean boost pedals to increase the solo level, it makes sense to place your compressor before all of that.

If you don’t, much of the boost provided will be canceled out by the compressor. You’ll have to run your other pedals harder to compensate, and you might end up with more noise and distortion than you really want. Placing a compressor before an overdrive can also produce creamier sustain than you can achieve with an overdrive pedal alone.

Alternatively, you can set your overdrive pedals to the same level as your clean sound and place the compressor at the end of the chain to use as a boost and sustain amplifier. You can also push tube amps into overdrive and use a compressor to lower the volume hitting the amp. The compressor provides some tube-rectifier type sag while it cleans the amp. When the compressor is bypassed, the amp overdrives and provides more than enough compression on its own. 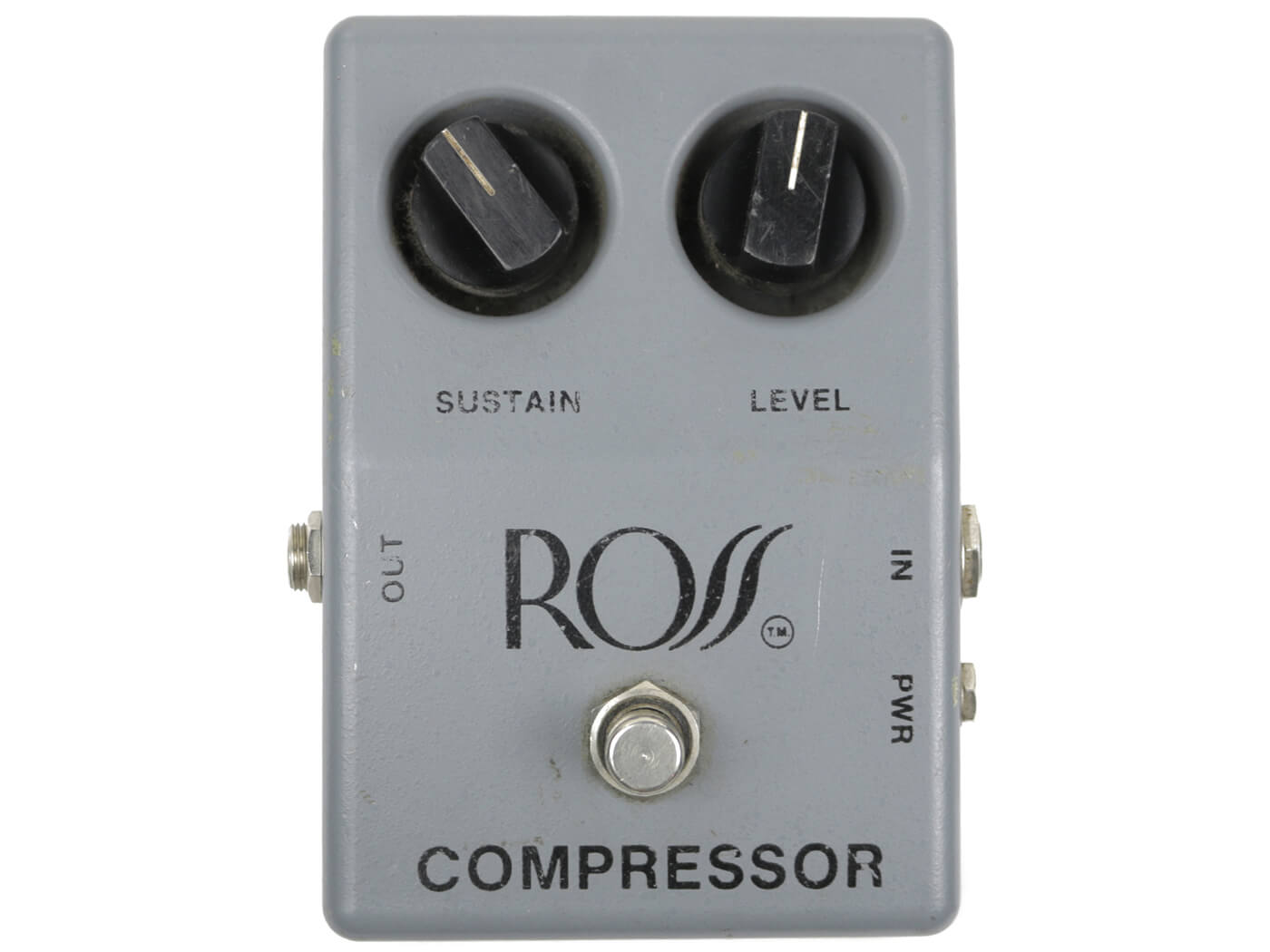 The funky guitar styles of Nile Rodgers, Prince and Cory Wong would be unimaginable without judiciously applied compression adding percussive punch and keeping the guitar front and center in the mix.

Funk players often alternate between strumming chords and single notes, but both must maintain a fairly even level of volume. To achieve this, you may need a higher compression ratio than a country player would use, as well as faster attack and release settings. Compressors with mix controls are very popular for this style of playing.

Metal guitarists often need compression for similar reasons to funk players. However, the situation is complicated by greater dynamic range, wider frequency range, and problematic frequencies, which can be caused by both equipment and the prevalence of lost tunings.

Puffed chords often generate a massive amount of bass content, which is not apparent when players switch to single notes or higher chord inversions. Therefore, a one-size-fits-all approach to compression doesn’t always work.

For this reason, compression is often left to the mixing stage and producers may choose to apply multiband compression, where the compressor response can be tailored to specific frequency bands. This allows very fine control of low frequencies without affecting the low and high mids. In this context, compression can be used to retain bass clarity and punch without losing the power and cut of guitar tracks.