Fender unveiled the original Jazzmaster guitar in 1958 to appeal to professional jazz guitarists. The size-offset body made the guitar more playable and balanced in a seated position, as jazz guitarists often were. But in an unlikely turn of events, the distinctive Jazzmaster became a surf guitar staple of the 1960s, later landing in the rock hands of Pete Townsend (The Who).

Ahead of its time, the cult classic Jazzmaster is back, now encapsulating the best of the acoustic and electric guitar worlds with the Fender American Acoustasonic Jazzmaster Acoustic Guitar series. The new series, engineered with Acoustasonic technology, allows Jazzmaster players to further optimize the guitar’s legendary feel while blending pristine acoustic and electric tones. Here are some of the highlights you can expect from the new Jazzmaster series, which is available to order now.

An acoustic guitar for the modern age

The sleek, minimal design features just three controls: volume, modulation knob, and a five-position rocker. The combined effect allows for dramatic shifts between rich acoustic tones and loud feedback, but with the precision needed to strike the right balance anywhere in between. It’s complete with a slim ebony fingerboard, contoured mahogany body, and a generous cutaway at the bottom, giving easy access to the upper frets.

The Jazzmaster silhouette joins the Stratocaster and Telecaster family in a line of new hybrid guitars built with the Acoustic Engine designed by Fender and Fishman. A proprietary blend of classic and future analog technologies optimize the guitar’s natural sound, then alter the resonance to deliver an organized collection of voices. The series, designed for all volume levels, enables creativity without any unwanted hollow body feedback issues.

Effortlessly switch between an assortment of rich, generous acoustic warmth or electric Jazzmaster tone at your leisure, without ever having to switch guitars. And the Jazzmaster model has an extra punch that the others don’t: the Tim Shaw electric humbucker, designed for extra grit and the thickest sound in the series. 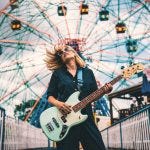