Fender is perhaps the most legendary of all guitar brands, with a remarkable ability to stay relevant and cool no matter the genre or changing tastes. Here is a brief history of how it became the world’s favorite electric guitar brand.

He may be one of the architects of the electric guitar, but Leo Fender started his career as a radio repairman and never played a guitar himself, but he was good at listening to people who did play and make equipment adapted to their needs.

Born in California in 1909, Clarence Leonidas Fender showed a unique talent for electronics early in his life, tinkering with electronics and parts from his uncle’s automotive electronics shop at the age of 13. year. He trained as an accountant but never stopped building and repairing radios and other audio equipment in his spare time, and in 1938 he started his own radio repair shop in Fullerton – Fender Radio Service.

Soon Leo was being approached by local bandleaders to create PA systems and other ways to amplify their string instruments – a challenge that spurred his creativity like never before. Then in 1943, Leo joined forces with his friend, former engineer Rickenbacker and inventor of the Vibrola tailpiece “Doc” Kauffman to form K&F Manufacturing Corporation to create Hawaiian guitars.

The following year, the pair filed a patent for a lap steel guitar that used one of Fender’s magnetic pickups, eventually selling the guitar with an amplifier as a combo. In 1946 Doc pulled out of their partnership, but Leo opted to continue on his own, renaming the company Fender Manufacturing wanting to focus solely on guitar innovations, he sold his radio repair business and never looked backward. 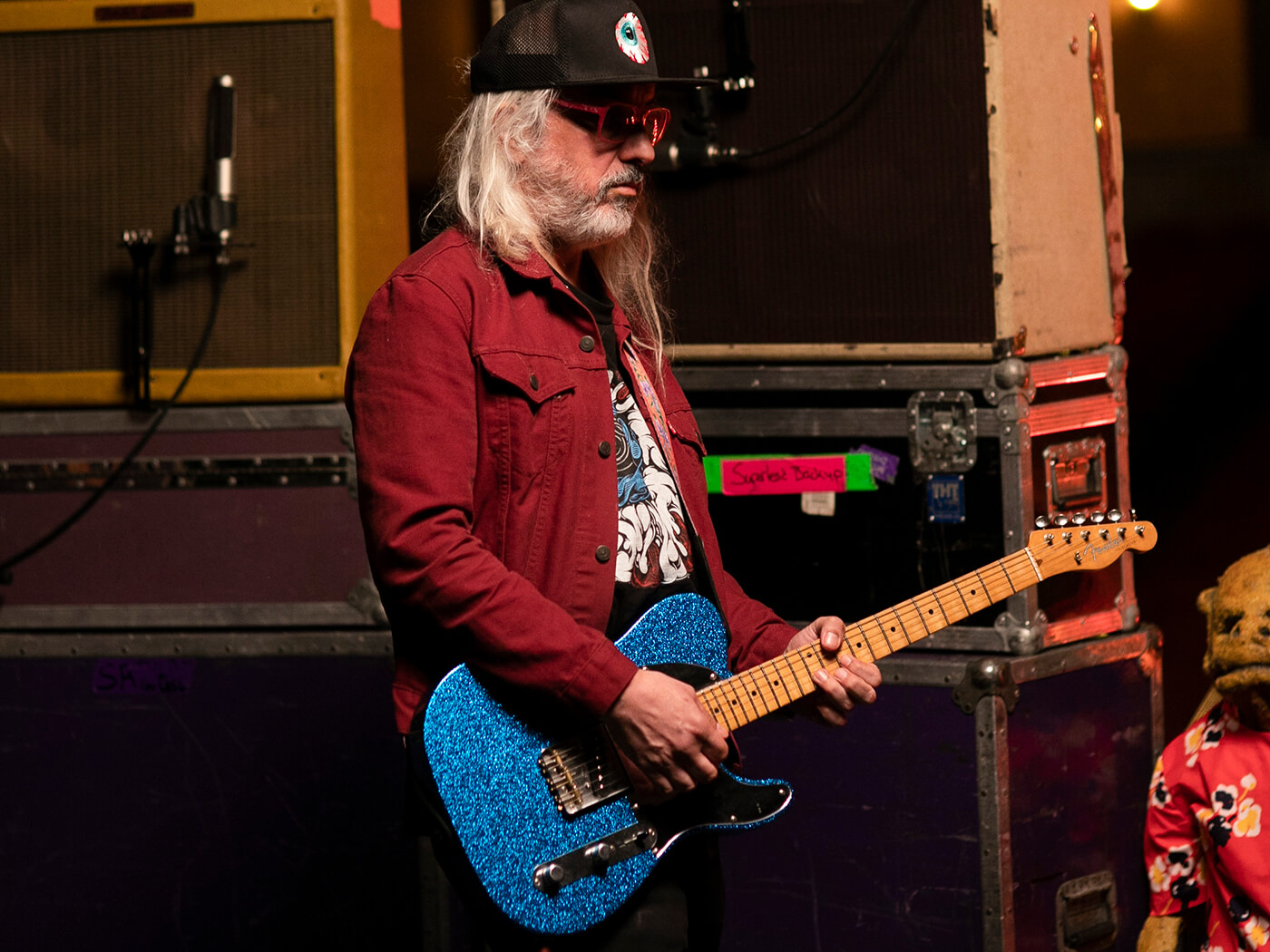 In the late 1940s Fender began to develop plans for a solid body alternative to the hollow body guitars that were popular at the time – this was not the first solid body, but guitars were considered a gimmick or novelty in most circles. Leo would change all that forever.

The Esquire arrived in 1950 and was a sign of a bright and glorious future – with its bolt-on neck, single-cutaway slab body and single pickup, it was a much more rudimentary instrument than many guitarists were using at the time, but that was his genius.

The solid body guitar was less prone to feedback, it could be played louder and cut through the mix of increasingly loud bands. Without even realizing it, Leo had created the perfect sound for the emerging sound of pop music.

In 1951 a dual pickup version would arrive, initially dubbed the Broadcaster, but soon renamed the Telecaster after a legal – the first mass-produced solid body was born.
1951 was a good year for Fender – that year also saw the arrival of the Precision Bass, which quickly became the first electric bass to truly capture the imagination of low-end dogs. Another legend was born, but Leo was just getting started

After the success of the Telecaster and P-Bass, Fender and its masterminds set out to reinvent the electric guitar once again. After two years of research and development, 1954 saw the release of a new guitar, whose space-age contours and unmistakable sound would forever change the face of guitar music – the Stratocaster.

While the Strat had similarities to the Tele, it offered a few key differences. It has a contoured double-cutaway body, three single-coil pickups and a synchronized tremolo system.
Just as Henry Ford did for the automobile, in the Strat Fender created a guitar that could be mass-produced and easily maintained with spare parts. The versatility and durability of this design is why it has remained relatively unchanged from the start – it remains the most recognizable guitar ever made.

But Leo wasn’t done yet – in the late 1950s he began work on a more “high-end” guitar aimed at jazz guitarists of the day, with versatile switching, big single-ended pickups winding, a revolutionary new tremolo system, and a look that would polarize players for decades to come.

The Jazzmaster never really caught the attention of its intended audience, but the burgeoning surf guitar scene devoured it, just as it did with the small-scale Jaguar in 1962. Both guitars will continue to to sow discord and be misunderstood until grunge pioneers like Sonic Youth and Dinosaur Jr put Leo’s “quirky” guitars firmly at the pinnacle of cool.

Due to health problems, in January 1965, Fender sold his company to CBS. Although nothing was black and white, and many quality guitars were made after sale, in the eyes of many guitarists, the CBS era marked the end of the “golden age” of Fender guitars.

Undoubtedly, CBS ownership has resulted in a reduction in quality and consistency, as costs have been reduced in multiple ways. But all was not bad. New models were introduced including the Thinline Telecaster, Tele Deluxe and Custom, as well as the semi-hollow body Starcaster and Coronado, the first of which broke from semi-tradition with a bolt-on neck and a new model of “Wide Range” humbucker. pickups designed by Seth Lover.

One of the most notorious cost-saving changes CBS made to Fender guitars in the ’70s was the change from a four-bolt neck to a three-bolt. It’s been claimed that this change will make neck adjustments easier, and there are fans, but the reason the three-bolt neck didn’t really take off was due to the aforementioned quality control issues that resulted in problems with playability, tuning stability. and intonation.

Fender returned to using four bolts for the Strat’s 25th anniversary in 1979. Another telltale sign of this era is the size of the Strat headstocks, which were enlarged in order to enlarge the decal.

After the tumultuous ’70s, the next decade brought significant changes to Fender’s operations and products.

Fender introduced the student Bullet line. It came in two variations and would later become a staple on the roster of Fender subsidiary Squier. They started offering alternatives to the more traditional models with unique color, pickup and tonewood combinations. Between 1979 and 1982, the Lead series was released.

The concept behind them was to make a more affordable guitar that would appeal to fans of the Strat. It was based on many specifications of the original 1954 model. Although their production run only lasted a few years, they ended up in very famous hands and became a collector’s item in the vintage market.

During this period, CBS brought Yamaha to run things, and it would end up being a hugely important time for Fender. First, Fender Japan was created to allow the company to compete with the affordable quality instruments produced in Asia for the American market by companies such as Yamaha, Fernandes and Ibanez.

In 1985 Bill Schultz and a group of Fender executives staged a management buyout, but this did not include the Corona factory – the result was a brief period when the only Fender guitars made were in Japan, while Fender’s revival established a new one on the road in Corona, California, and set out to return the company to making guitars that more closely reflected the quality and features of its 1950s and 1960s heyday.

Two years later, another major change would come when Fender opened its first factory in Mexico in 1987. The same year that Fender opened the Custom Shop, employing master guitar craftsmen to build instruments that channeled the brilliance of those first Fender guitars, while creating signatures. models for Yngwie Malmsteen, Jeff Beck, Eric Clapton and dozens of others in the decades that followed.

Fender in the modern age

In the years since the management buyout, Fender has gone from strength to strength and is now unquestionably the biggest and most famous guitar company in the world. In addition to installations in the United States, Mexico and Japan, the big F has expanded elsewhere in Asia, making Fender guitars accessible at all price points while still managing to maintain a level of quality control that would have been amazing 30 years ago.

The company also continued to innovate, creating popular new guitar models such as the Meteora, Cabronita and perhaps the most revolutionary of them all, the Acoustasonic series, which blurs the lines between electric and acoustic guitars.

Perhaps unique of all guitar companies, Fender has also managed to branch out without ever losing its identity – you’ll see Fender guitars in the hands of heavy rockers, neo-soul poppers, grunge alternative rockers and country kings. and no one will bat an eyelid.
Seven decades after Leo Fender’s first democratized electric guitar, Fender remains a brand for everyone.