Whether you want to hit the streets, need a transit-friendly backline for an open mic night, or just want an amp that can be ready to go at a moment’s notice, these are the best portable amplifiers on the market today. .

The latest addition to Blackstar’s hugely impressive Fly range increases in size and power to create an extremely affordable all-in-one performance solution. With two three-inch stereo speakers and 12 watts of power, the Super Fly packs the punch to be heard on busy street corners and with independent channels for guitar and microphone, you can play and sing along to your heart’s content. way.

As you’d expect, the guitar side is very robust, with acoustic and electric guitar modes (the latter offering clean and practice modes), plus a three-band EQ and built-in reverb on the vocal and guitar channels. . There is also the possibility of extending it with an additional cabin, a battery to record your AAs and a Bluetooth input to play along with backing tracks. 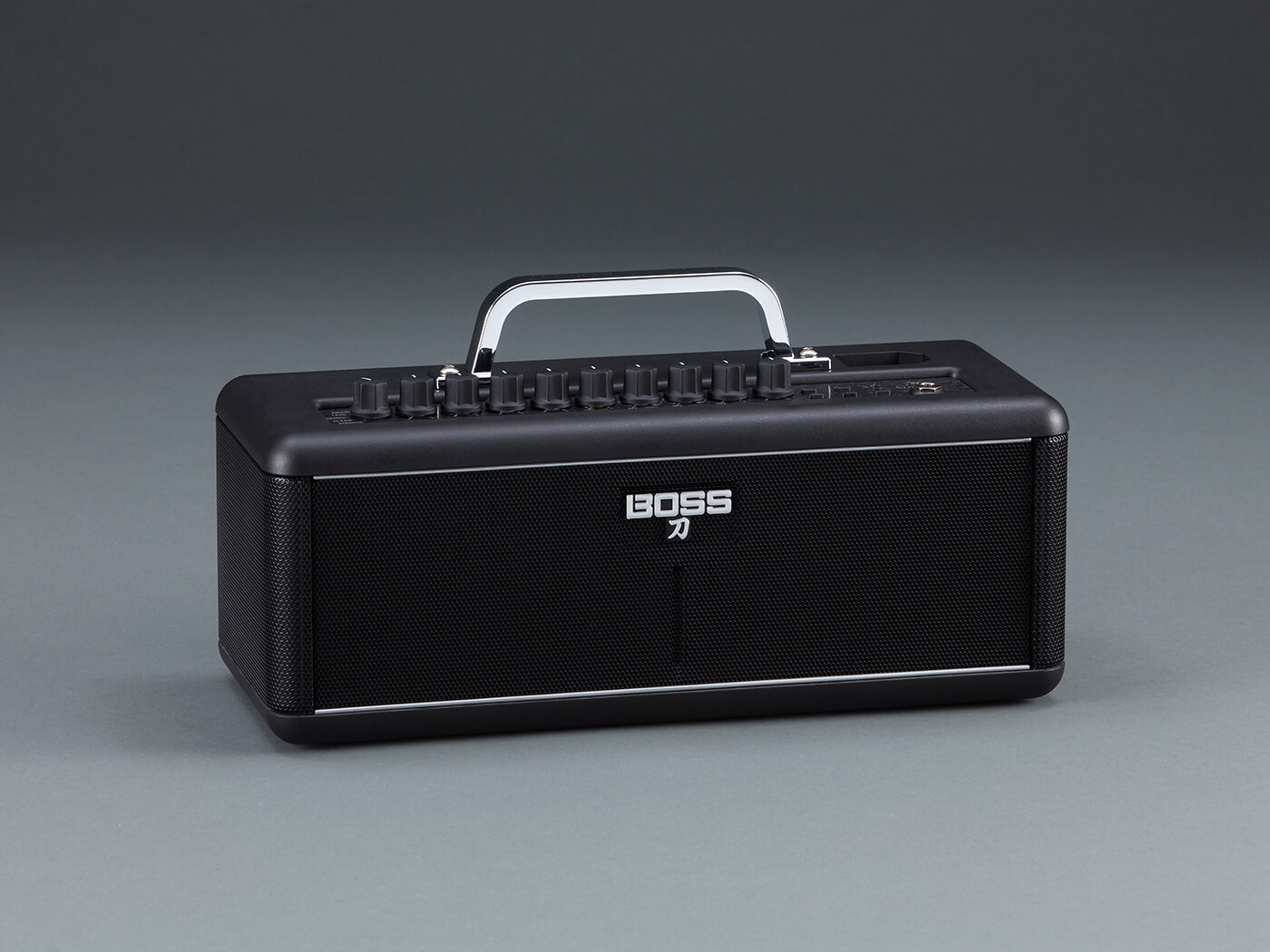 Boss’ Katana range has received rave reviews for its great sound, 21st century features and attractive price points, but the Air is perhaps the most high-tech Katana yet – and it’s a choice. great for players who don’t want to be rooted in the place.

Billed as the world’s first truly wireless guitar amp, the Katana comes with a wireless guitar adapter that plugs into any jack and promises latency-free guitar playing for up to 12 hours. With the Katana Air’s 20 watts of power pumping out of the Katana Air’s two three-inch speakers and access to Boss’ impressive digital amp and effects software (with six user presets and the ability to edit them wirelessly via the Tone Studio app), it offers great versatility. for electric guitarists on the go or practicing at home without trailing cables. 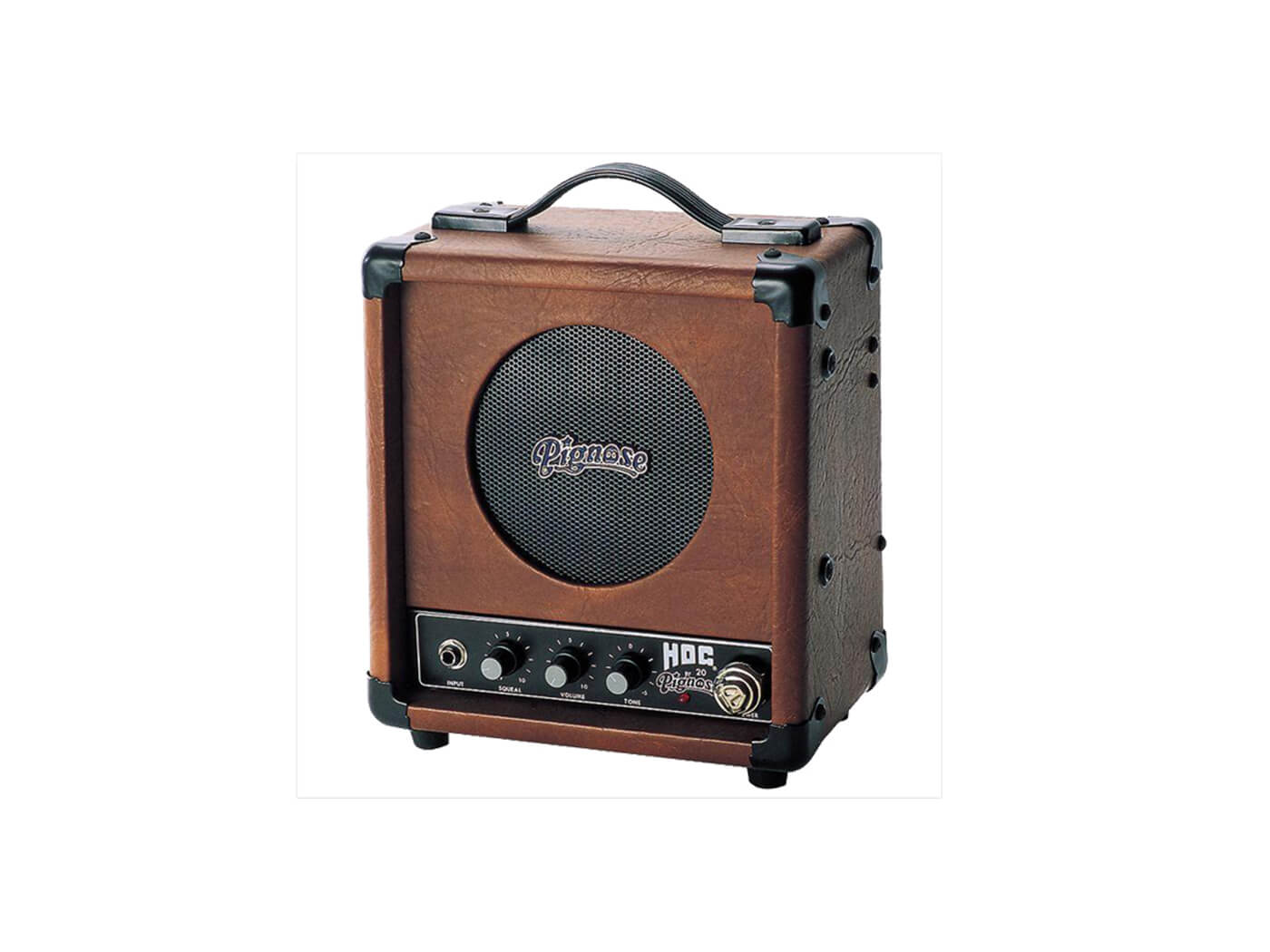 Pignose has been making great-sounding battery-powered amps since the 1970s, where it earned a reputation as the go-to warm-up/jam amp for rock stars big and small.

The Hog is the big brother to the aptly named Legendary battery-powered practice amp, delivering 20 watts of solid-state power from a rugged 6.5-inch speaker. The Hog is light on the frills but great fun, with just gain (shout), volume and tone, plus a pair of inputs and a headphone output. More useful for street guitarists, however, the Hog also comes with a built-in rechargeable battery that offers six to 10 hours of playtime and charges automatically when plugged in. 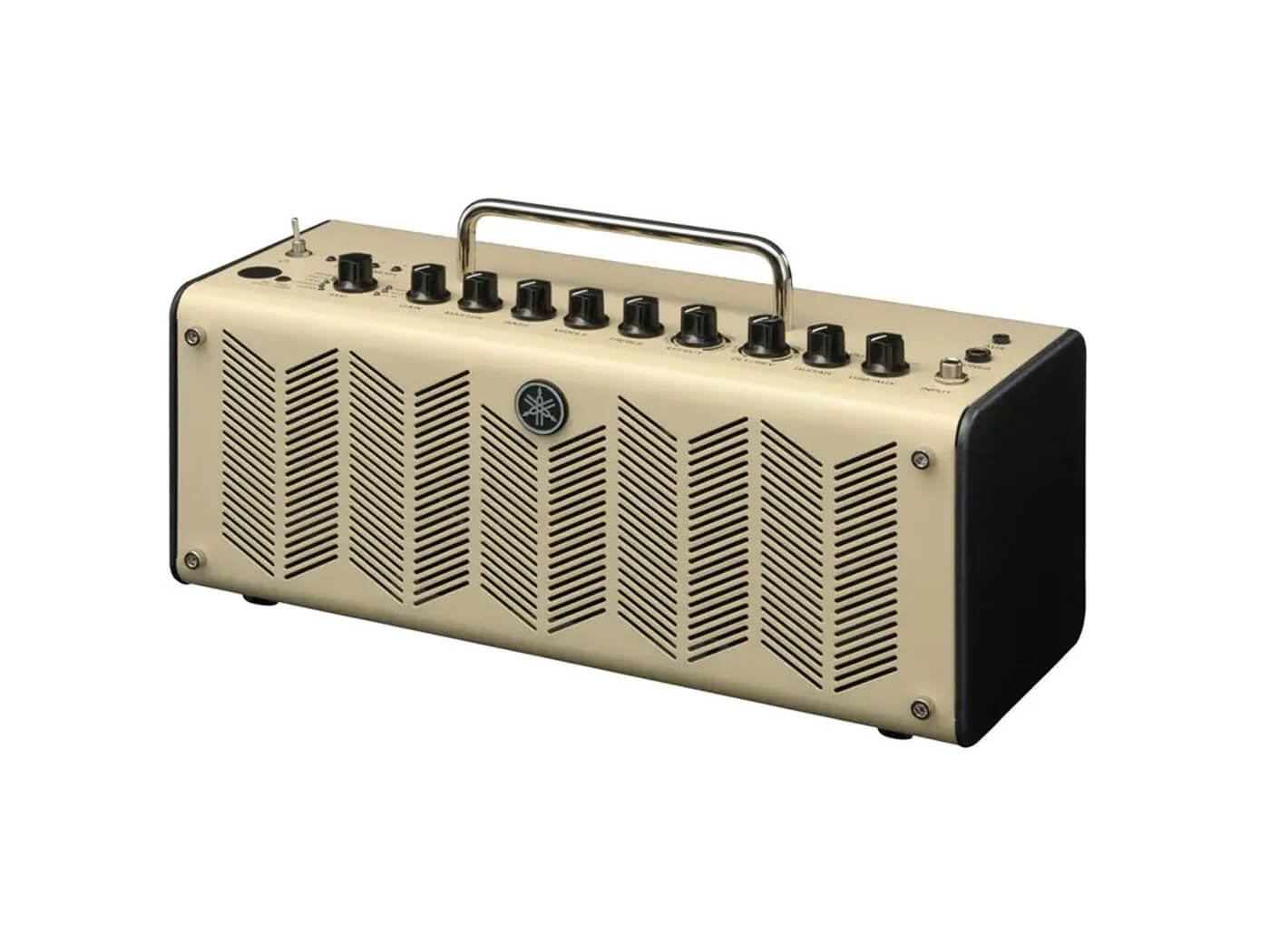 Yamaha’s unconventionally proportioned THR range was a revelation when it launched in 2011, effectively inventing the concept of the “lifestyle” desktop amplifier. With 10 watts of solid-state power output and a pair of three-inch full-range speakers on board, however, it doesn’t have to stay at home – pop in eight AA batteries and you can take the THR wherever you go. you want.

And with the range of sounds it offers, you should want it. Yamaha’s Virtual Circuit Modeling technology delivers pleasingly authentic sounds and feel from the five different electric guitar options on offer. With additional modes for bass and acoustic, plus multiple effects and USB recording if you need it, this is a feature-rich portable amplifier. 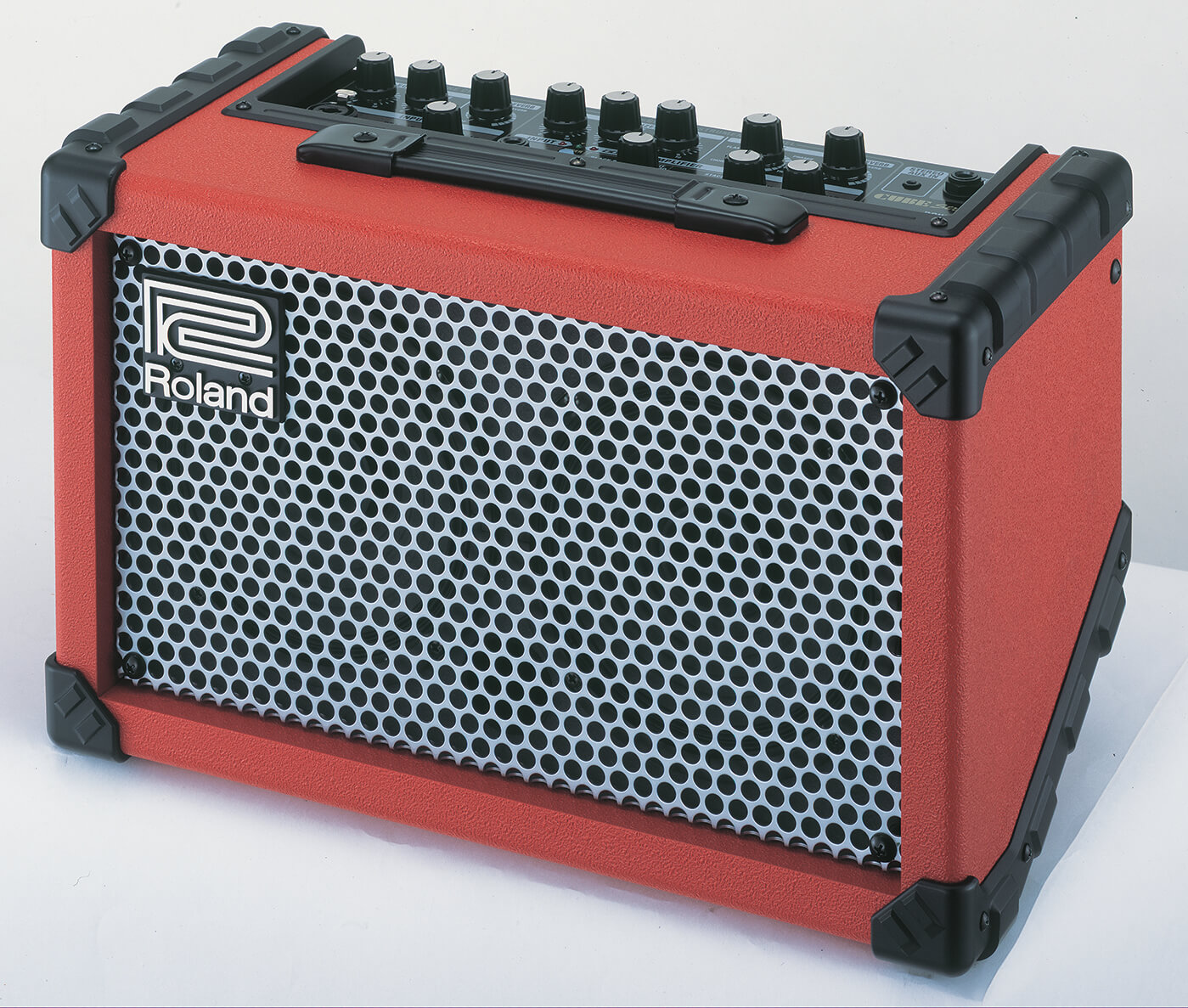 As close to an industry standard bus amp as you can get, Roland CUBE amps have been a constant presence on street corners around the world for many years now, offering the perfect balance of tone, portability and price.

Since 2008, the five-watt, battery-powered CUBE Street responds even smarter to street musicians with a projection-friendly wedge-shaped design, a pair of 6.5-inch neodymium speakers and independent mic inputs. /line and guitar. There are plenty of great sounds to be had too, thanks to Roland’s COSM modeling, with six built-in amp sounds (including acoustic) and six built-in effects, including delay, reverb and chorus. 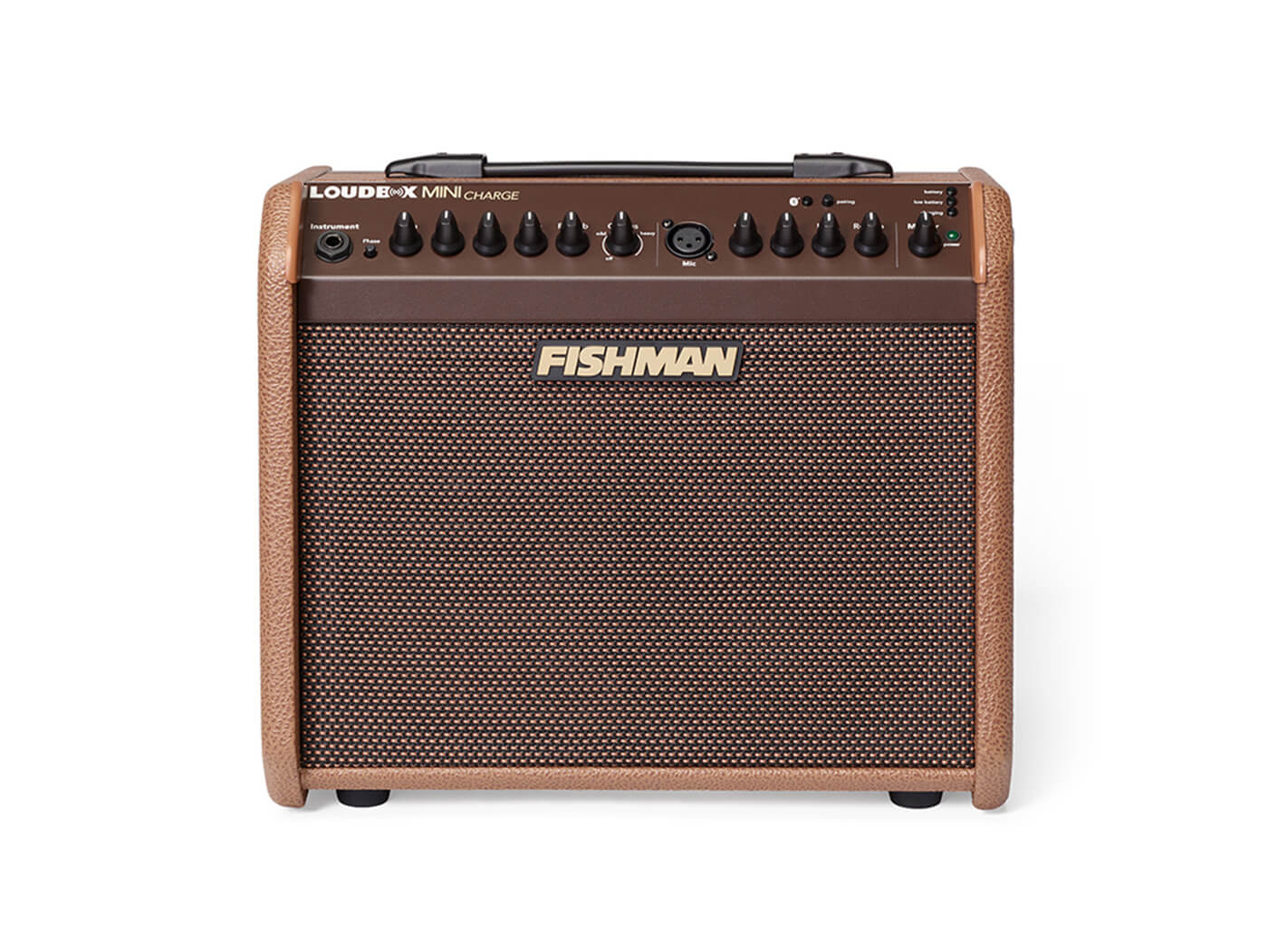 For more than three decades now, Larry Fishman has been one of the foremost architects of amplified acoustic sound. The Loudbox Mini brings all of this knowledge and experience and condenses it into a lightweight, portable amp for singer-songwriters.

The Loudbox Mini produces 60 watts of clean acoustic sound – more than enough to fill a room or a street project – with separate channels for guitar and vocals, each featuring a two-band EQ and reverb independent to compose according to your tastes.

The guitar side also offers chorus to add more depth to your sound and Bluetooth to add backing tracks from your phone. In this “Charge” variant, you also get the added benefit of a rechargeable battery that lasts up to 12 hours. 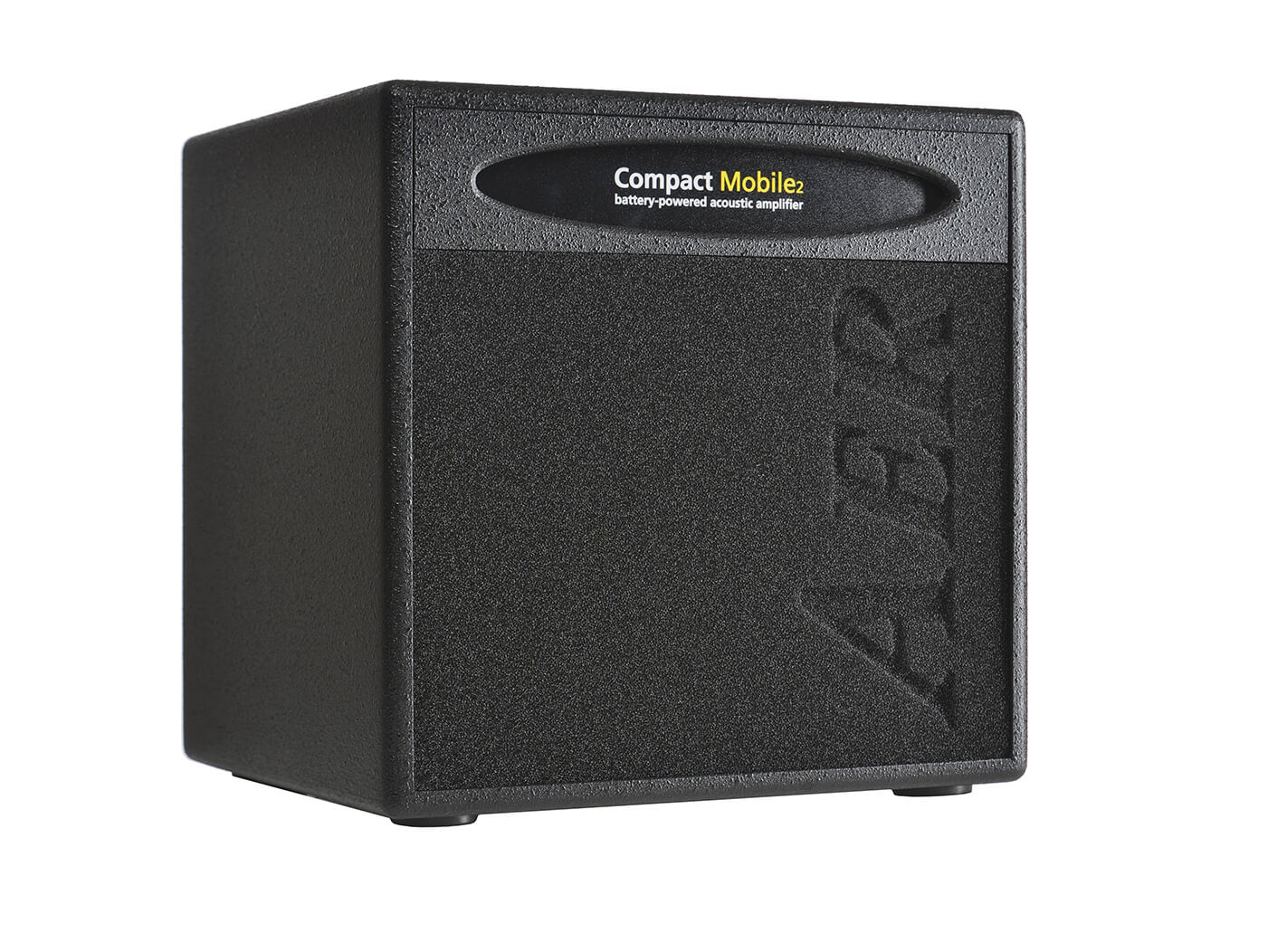 If you’re an acoustic player looking for a premium acoustic amplification experience that’s also portable and rugged, German brand AER has been the first port of call for many.

The Compact Mobile 2 offers players everything they expect from an AER amp in terms of build, tone and sleek styling, but with the added ability to take it anywhere you want thanks to the built-in rechargeable battery . Based on the hugely popular Compact 60 combo, the Mobile 2 delivers 60 watts of output from the eight-inch dual-cone speaker, with independent vocal and guitar channels, independent EQ, and sensitively chosen onboard effects. , all with up to four hours of mains-free gameplay. 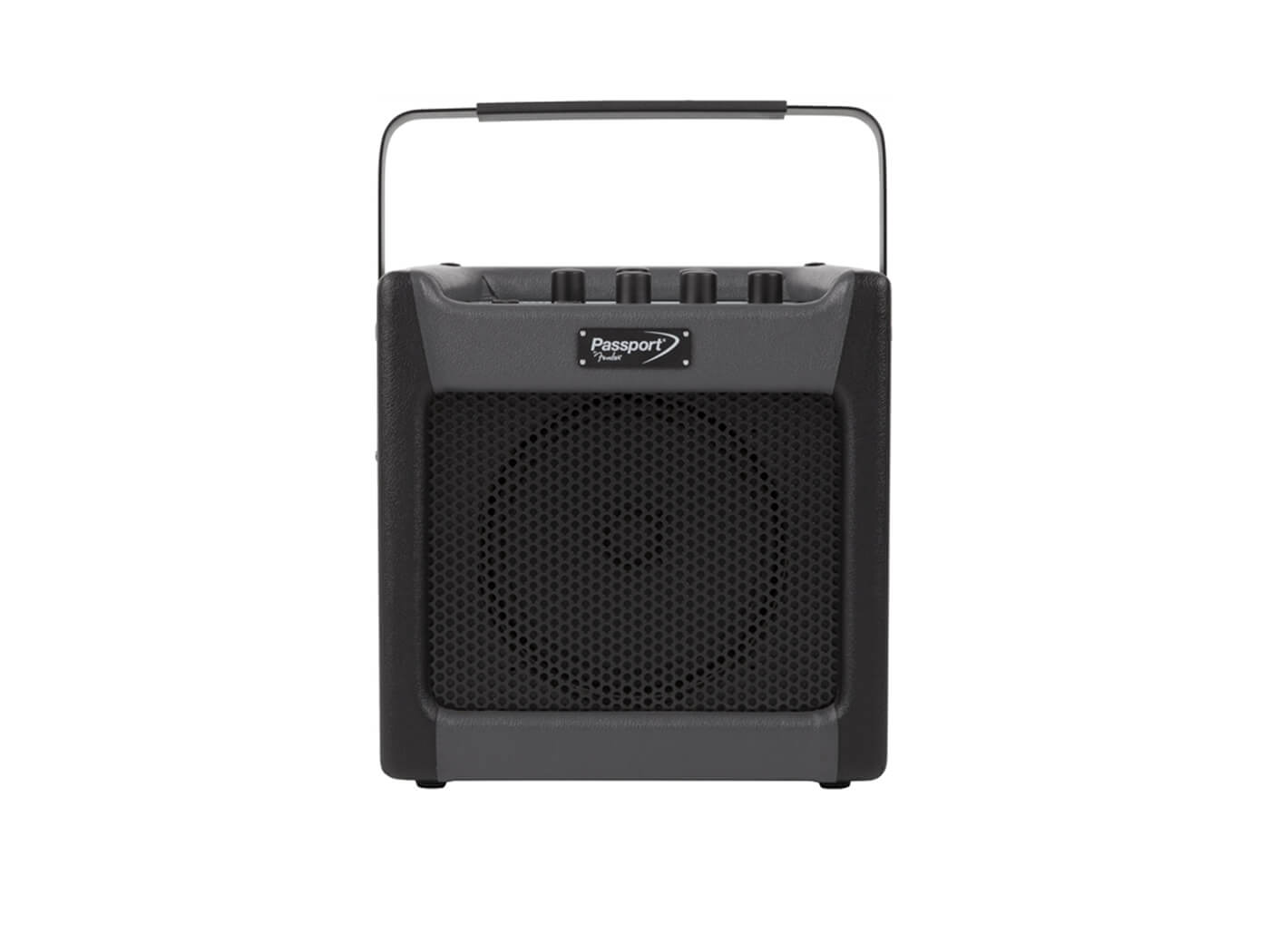 Fender’s Passport is technically a mini PA system, but as you’d expect from the world’s most famous guitar maker, this gem version contains a wealth of modeling options to enhance the sound of your playing. portable. Rather than having to fiddle with amp models and corresponding effects, Fender has instead condensed everything into 24 selectable presets built from eight classic Fender amp sounds – including the ’65 Twin Reverb and Champ – more effects ranging from delay and reverb to chorus and flange. At just seven watts, it won’t blow anyone away, but the useful carry handle doubles as a kickstand to help your sound project. 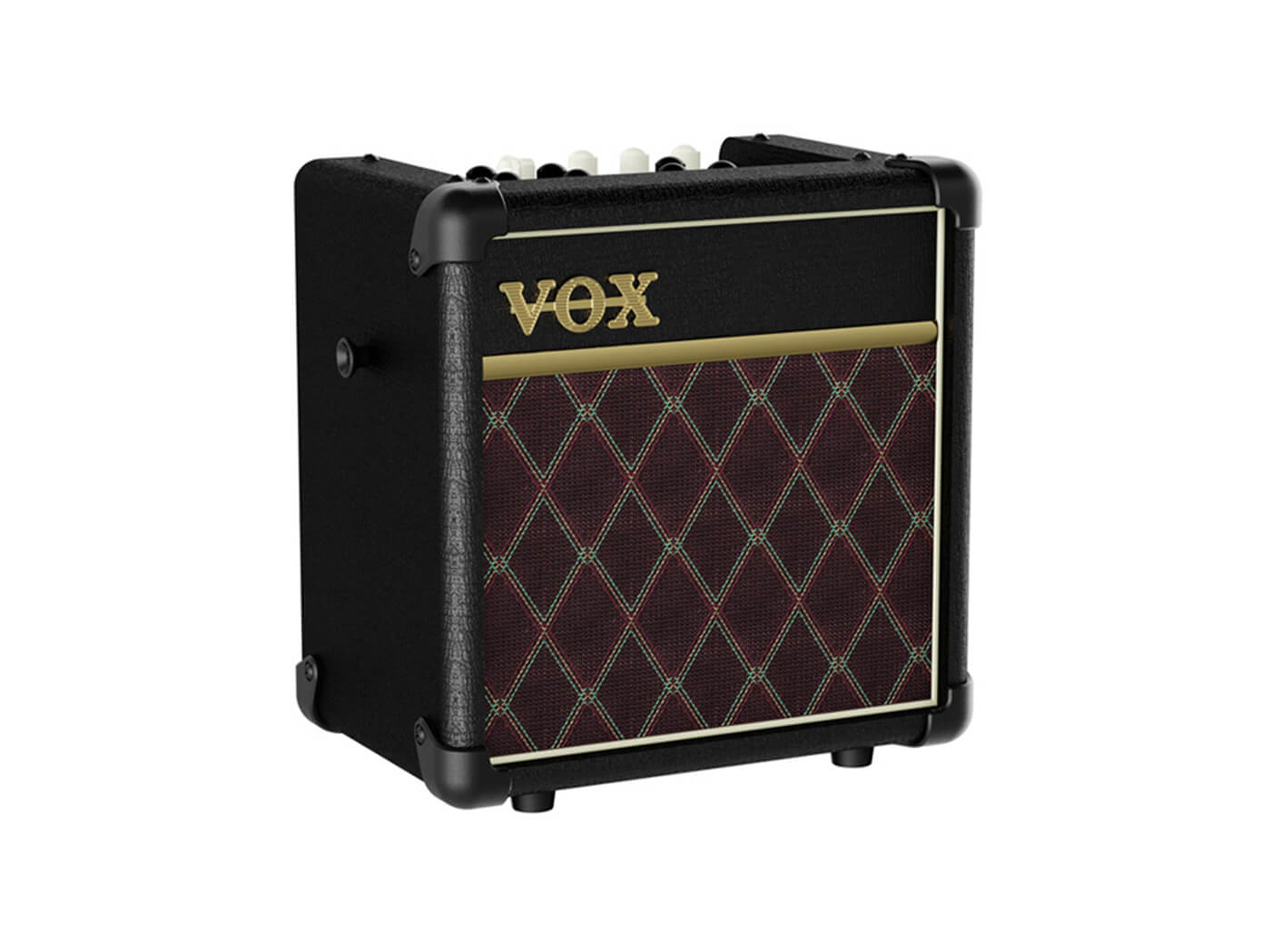 For some traveling musicians, simplicity is the most important thing when it comes to choosing an amp, but for others having maximum versatility at your disposal is an essential tool. Vox’s Mini5 is squarely aimed at the latter, packing a massive amount of sonic options into a tiny little box. Using Vox’s high-quality Valvetronix modeling, you get 11 amp models and eight effects at your disposal, all of which have impressive bass response from the five-inch speaker thanks to Vox’s Bassilator technology. And if you need a little lo-fi backing, you can even call on one of the 99 built-in rhythm patterns to play along with. 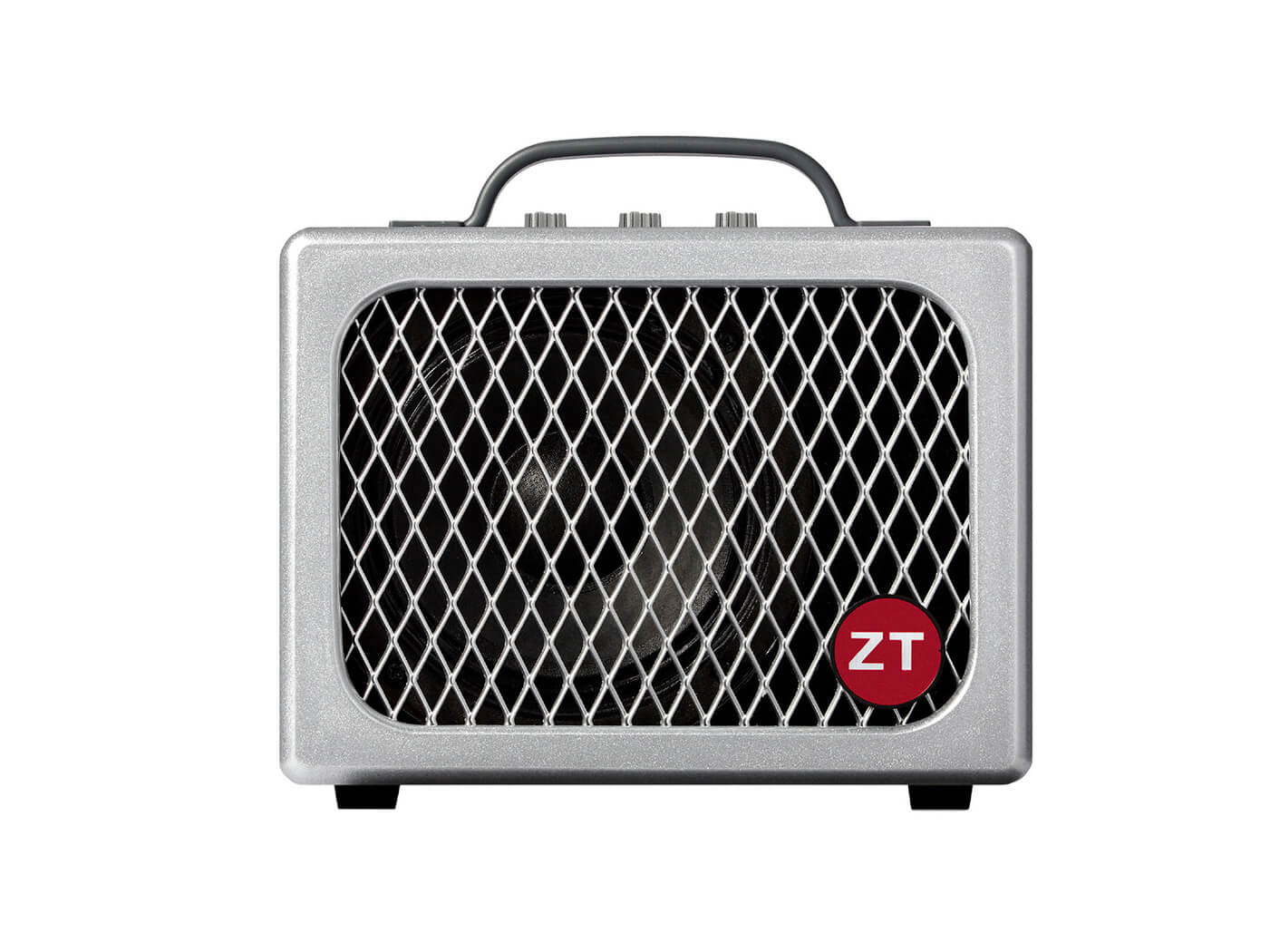 It may only be six inches tall, but ZT’s Lunchbox Jr amp delivers an impressive blend of no-frills tone and touring musician-friendly ingenuity in its unassuming silver chassis. First off, this thing isn’t a shrinking violet in the volume department, with powerful, warm valve-like tones that will easily fill a small room or have you heard on the high street, while its simple tonestack three-button does not. things too complicated.

The really smart thing about the Lunchbox Jr, though, is what it does with power – with a standard 18-volt input, you can plug it into a battery ($9.99) or even a power outlet. car current to keep playing, while a nine -volt output means you can even use it to power your pedalboard on the go. 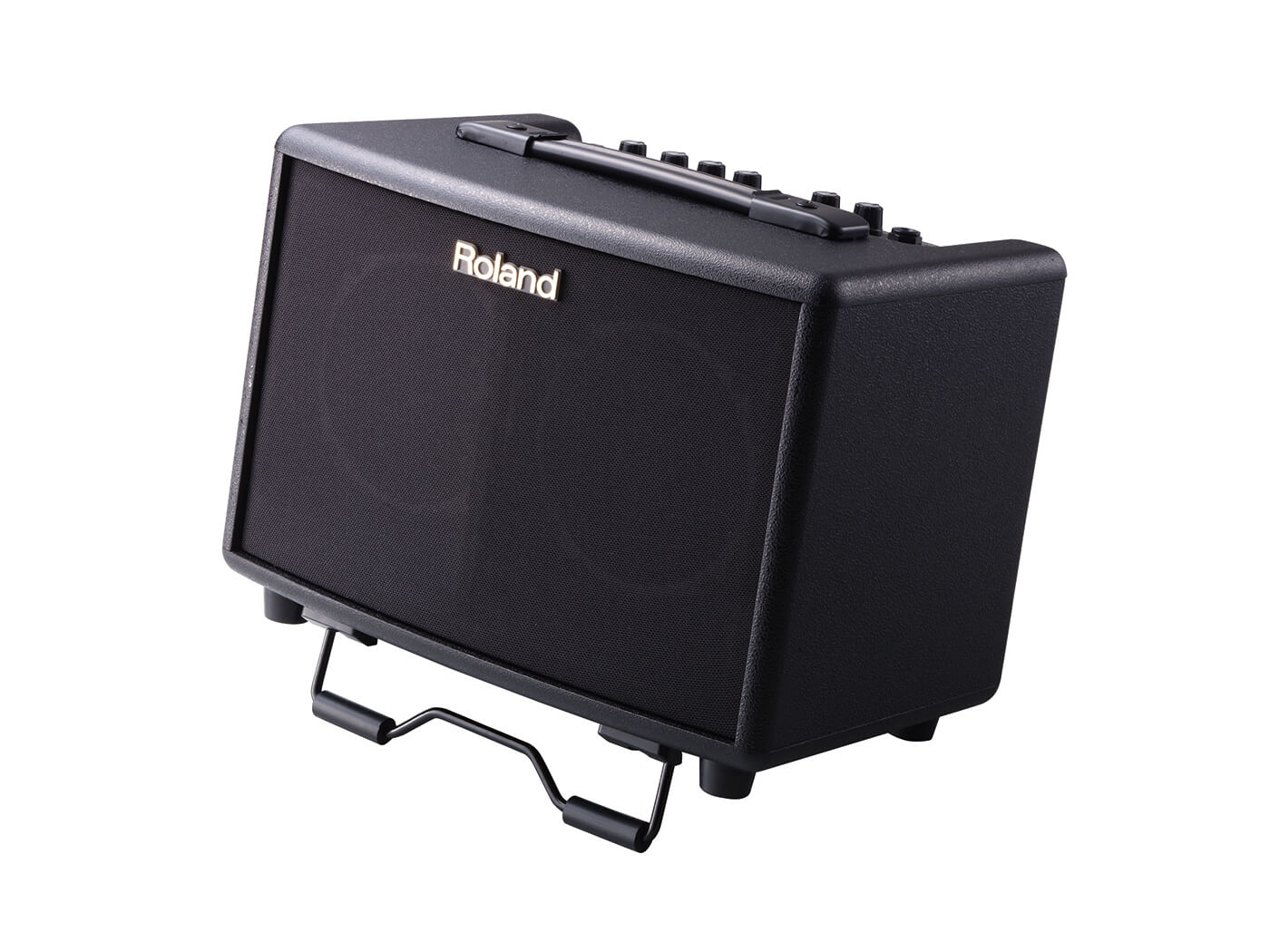 If Roland’s CUBE format appeals but you’re a purely acoustic performer, the AC-33 is an attractive alternative that takes much of what makes the CUBE great and adds a few extra features suitable for the songwriter- outdoor performer.

Like the CUBE, it offers separate channels for vocals and guitar, but instead of the various on-board esoteric effects, the options here are reduced to a switchable chorus mode on both channels and a reverb/ambience control for vocals. What you get instead is a handy anti-feedback switch and 40-second looper, so you can channel your inner Ed Sheeran. Dare we say, the AC-33 also looks a lot more upscale and cafe-friendly than its CUBE sibling. 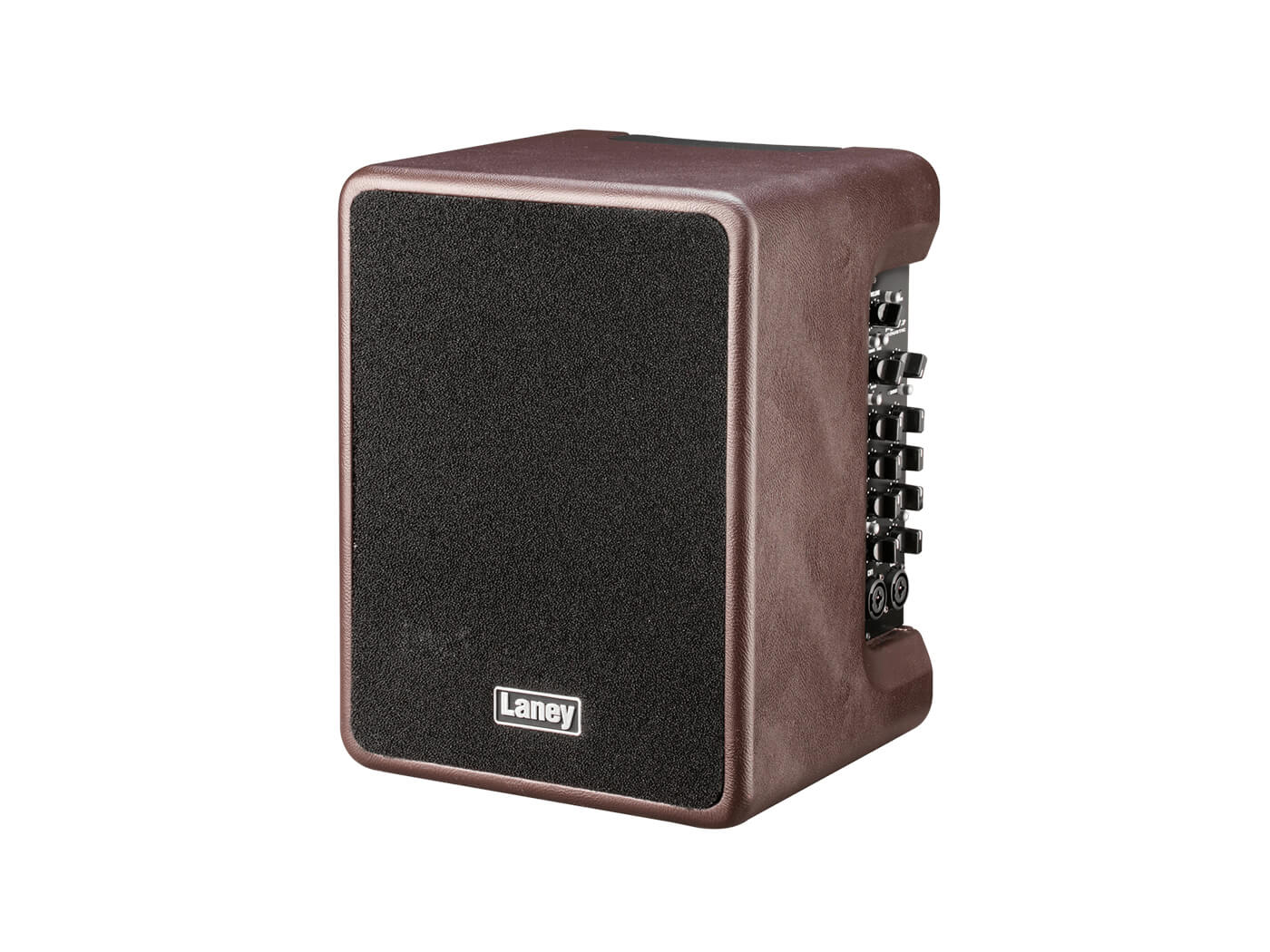 With its dark brown tolex and rounded cabinet, the A-Fresco certainly looks like it’s tucked away in the corner of a coffeehouse gig, but this 60-watt acoustic combo can go anywhere you want with a drum set. remarkable 24-hour rechargeable. Powerful.

The UK-designed amp also offers everything you’d expect from a portable bus amp, with XLR/combi channels for vocals and guitar, each with three-band EQ, reverb and tone. switchable chorus, while the guitar also offers anti-feedback. and phase switches. You also get a DI output for hooking it up to a larger PA, effects send and return for pedals, and an “eco” switch to extend battery life while by reducing power.